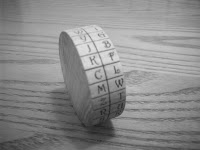 I've got a few old pieces of laser-engraved, 2 inch dowels laying around the shop from when EllBee challenged me to recreate a Jefferson Wheel Cipher. At the time, I had access to a laser at my work and friends in the CAD world to help make sure 26 letters were spaced correctly and precisely around the dowel.

To make a long story short, I presented the wheel cipher to EllBee at a delightful coffee shop named the Java Mio in Petersburg, VA. As we were fondling it, one of the wait staff came by and saw it and said, "Cool, a Cryptex...does it open?" The DaVinci Code has been recently released so I knew what she was talking about. Unfortunately, I had to tell her "No, it was not a cryptex, but rather a reproduction of device used for encoding and decoding messages in the early 19th century." She clearly was not as smitten with the device with that explanation. Her reaction clearly got me thinking, however.

My National Treasure: Book of Six Secrets letterbox was created shortly thereafter. Six different wheel ciphers packaged in one neatly wrapped book, all based on significant historical events of American history. My contribution to the box is based on Thomas Jefferson and his leadership with the Lewis and Clark adventure.

Back to my story...after the release of Six, I began researching and plotting a wooden cryptex. Hadn't seen much on the internet that resembled what I had in mind. There was a creator of a very nice precious metal device ($$$), and of course, the reproduction DaVinci Code model you see in the SkyMall magazines on airliners. Nothing made of wood that resembled my reproduction wheel cipher. After figuring out the mechanism of the inside, my Cryptex! letterbox was born...but that's another long story.

Back to the topic of this blog...the wheel cipher disks are chopped from a 12 inch long, 2 inch dowel that has been engraved on a Universal Laser with a rotary fixture accessory that allows engraving of cylindrical products. I recently found out this process is very expensive in the real world. Fortunately, I had some fellas (with equipment and skills) who helped me out for the small price of a friendship.

The simple cipher disk you see is two sections from that dowel. Each disk is 1/4 inch wide. The two disks together in the photo are about 5/8 inch wide. The offset of the letters in the boxes is to allow for the 1/8 inch saw kerf when chopping them off with my miter saw.

It works by encoding a message.

Take the letter on the right side of the disk. is the decoded letter. The encoded letter you want to use is the letter abeam it on the left. When the reader is deciphering, they naturally start on the left side and read right. Your encoded message of "JKK" means nothing unless you have this disk in front of you. Decoded, the message tells the reader that you are my "Best Friend Forever" or "BFF". OK, I was limited in what I could use with the picture, but hopefully you get the idea.

I think I need to take Ellbee with me to get that box in the ground. ;)
Of course, first I got to figure out what box it is...

Well, I'm clueless at the moment, but I'll bend my mind to the task as best I can. I'm still heartbroken that Java Mio went out of business and I have this wonderful box and cipher wheel waiting for us to find a new location (and get a nice brass plaque to hide the Karamella and Java Mio that X incised into the box). But I'm proud to have turned him onto cipher wheels! :-D
EllBee

You know that all students have more written work, this site https://rankmywriter.com/masterpapers-com-review helps me to cope, which plays the role of an assistant in written work of any complexity with high quality and competently at a small price

Have been searching for a research paper for sale? Well, we have a more suitable alternative write my college application essay for you. There is no need to rack your brains on the assignment, especially when you have no ideas at all regarding the issue you are supposed to deal with.