A couple of years back I found the Ultimate Letterbox. My co-worker had picked it up years before and had it laying around our office in a state of disrepair. It was built in the 1930's as indicated on the bottom. We couldn't just put it anywhere because it weighs about 70 lbs. Mounting it...the location needed to be perfect and the method to mount it had to be sturdy. Undoubtedly, it would require someone's permission to hide it in plain sight. My secret partner couldn't have done a better job in finishing the project off. 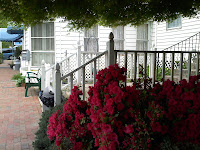 To get it up to standards, I spent an hour or so sand blasting the years of paint from the surface to get down to the cast metal. Once that was accomplished, I put five light coats of Krylon industrial red primer everywhere I could get it. After several days of drying, I hit it with several coats of silver with a special hammer texture. I hand painted the black lettering with enamel and added some laminate placards to indicate this as a novelty item and not a mail box. Of, course I had to include the Atlas Quest and LBNA logo on the front just to make it a really obvious HIPS box.

The lock for the depository is a standard lock found at Lowes with just a few modifications to make it work with this box. The inside is volumous. It's a great spot for a large logbook and has plenty of room for hitchhikers. The location of the box...and more importantly, the key...well, that's a secret! 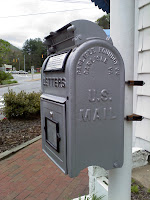 That's pretty cool! Do they still use these anymore? Or does it date me that I remember mailing letters in one like this (except blue)?! Hope I trip over this someday in my travels!

New here. So, have you had any letters? ;-D Sweeeeet!
OD

Again, I am in awe, as I am with all your boxes. It would be appropriate if this ended up where it began........But being an X-box that is probably too obvious......or not?

That is soooo cool! I think it's awesome that there is finally a permanent spot for it! I may just write a letter and drop it in there too for fun if I ever find it. :)

wow! It's beautiful! does anyone every drop their mail in this box?! Looks like great fun.

Nope! No mail reported yet. Hopefully everyone will read the front very well. I worry more about the vandals sticking something in there.

WE ARE REALLY GRATEFUL FOR YOUS BLOG, THIS IS THE BLOG THAT I WAS REALLY EXACTLLY SEARCHING FOR. THANKS AND PLEASE KEEP IT UP THE GOOD WORK!
고스톱

THANK YOU FOR SHARING THIS KIND OF GREAT INFORMATION, A GREAT BLOG. I WILL DEFENITELY BACK. 💕❤
일본야동

Hey everyone! Our custom assignment writing service https://essaysrescue.com/educibly-review/ offers tailored papers as per your instructions. Each writer ensures that what you order is carefully executed with comprehensive research and precision to compose a meticulous paper that will delight your professor.